Testing the analog output resolution of the Euroduino:

Note: Audio samples are not included yet, and there are more tests to be done on the sample rate section.

The previous articles in this series are:

So far, we have dealt with the subject in the abstract, using best case scenarios and working from specification sheets.  Reality is, as always much more messy.  To start with, lets look at the most problematic part of the platform, the analog outputs of the Arduino in it’s default state using the Euroduino module as a testing ground.

It is simple enough to write an Arduino program to output very specific values, and to chart those values to see if they are being translated as we expect them to be.

Ideally, bit depth should be at least 12 bits.  The PWM output of the Arduino falls considerably short of that, with only 8 bits of resolution.  Lets see how that 8 bits performs. 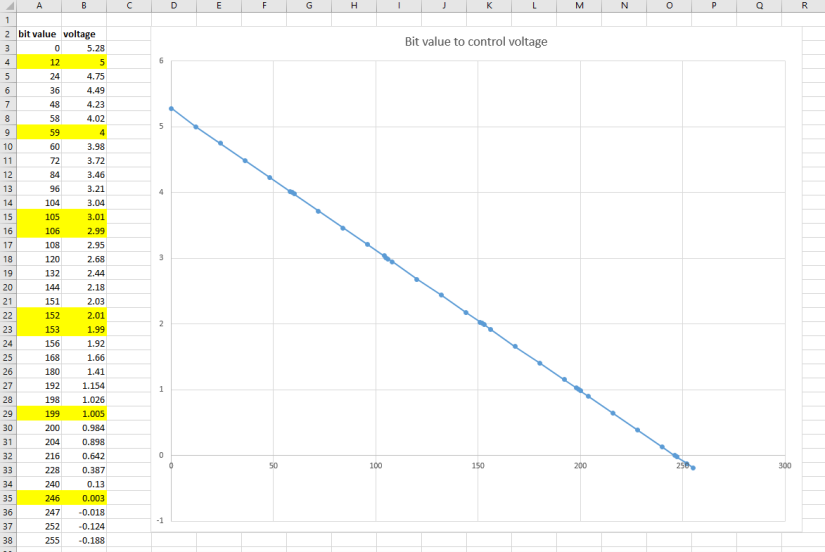 This chart compares the values used in analogWrite() commands with the specific voltages output on the cv out 1 port.  The code to do this is simple, and I stepped through the values in units of 12 so that I could get good voltage readings and not spend all day comparing values in the serial window to my voltmeter.

What it shows is that the Euroduino/Arduino has good linearity, so we can make some observations that will make programming easier:

It is simple to write a program to play a slow descending glissando in order to see how smoothly the device can perform.  We already know from part two of this series that the output is not expected to be smooth, rather that there will be some noticeable stair-stepping, and that note values are not going to be precisely in tune.  A simple program can tell us if this is actually the case.

All the code in this post will use some common definitions, taken from Tim Ressel’s sample program that accompanies the Euroduino.

To output a descending glissando, add the following code:

Here is a sound file created by routing the CV 1 output of the Eurduino (running this program) to a Tiptop Z3000 oscillator.

Stair-stepping is obvious – the pitch descends in a series of discrete steps, not smoothly.  Looking at the code, it is clear that this is pretty much the maximum resolution achievable without hacks.

PWM on the Euroduino runs at a particular frequency determined by the system clock speed.  For timer 0, which is what the Euroduino exposes, the PWM frequency is determined by the system clock divided by the prescaler, and then by the 256 steps used by the counter.  16 Mhz / 64 / 256 = 976.56 Hz, roughly a sample rate of 1k.  It is possible to increase this rate, but not without causing other Arduino functions to malfunction.

You can call analogWrite() much faster than 1k of course, but it is wasted effort and will likely cause unpredictable results since the compare value would be changing unpredictably.

Just for fun you can test this and remove the delays and print statements from the last program to see how fast a stock Arduino program can call analogWrite(). (print always adds a lot of overhead that would otherwise mess up calculations).

Here is the output of the test:

(why the Arduino does not allow copy is beyond me)

This tells us that we can write the output roughly 118 times faster than the output is updated.  Adding the second output port:

brings us down to around 62 times faster. 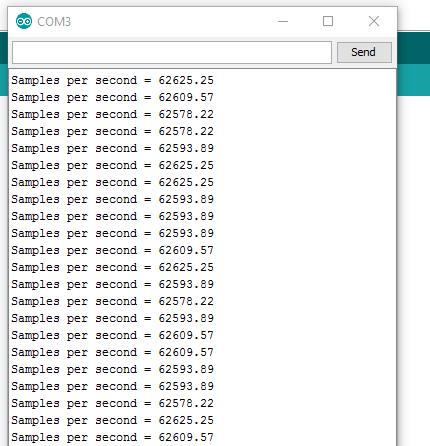 In either case, this sounds plenty strange.

It would be nice to know when it is time for a new sample to be written, and there are interrupts intended to allow this sort of thing.

There is an interrupt that tells us when the counter has overflowed and reset, which would be perfect, but that is already taken by the Arduino library.

The next best thing is to use an interrupt that triggers when the counter reaches a certain number.  Adafruit, one of the primary distributors for all things Arduino, has a good info page at: https://learn.adafruit.com/multi-tasking-the-arduino-part-2/timers which gives detail on strategies for using timer0 interrupts within the Arduino environment.

The following code sets it to trigger at the maximum value of the counter, which is about as close to the overflow interrupt as we can get.

This code is added to the setup loop:

And here is the code for the interrupt body itself.

Add this code to an Arduino program, and the interrupt will be called one thousand times a second.  In this example, it simply flashes the led on pin 13 on and off, telling us that it is working.

Next, we should update our descending tone code to call analogWrite() only when it is safe.  I also added a delay of half a second so that the steps of the glissando would be more apparent.

Note that there is no code left in loop – all management of the output buffer is done in the interrupt!

It may be possible to dither the output to add a couple of bits resolution.  Dithering is, roughly speaking when you alternate two adjacent values in an attempt to simulate a third value that lies between them.  What this would take would be to change the value used in analogWrite() every time a sample is output to add either a 1 or a 0 to the output depending on output value.  This would allow an extra bit of precision at the cost of some ripple in the output, and some complexity to the program.  With any luck, the filter capacitors on the output of the Euroduino (that are needed for PWM anyway) will help remove most of this additional ripple.

Here’s  a short experiment to see if dithering makes any difference, and if so, if it has any artifacts that are unwanted:

As it turns out, that works well, even if it does cut the actual update rate by 50 percent.

Dealing with PWM and dithering noise

When I attached an oscilloscope to the output channels of the Euroduino, I expected to see some noise from the dithering code above, but expected the output to otherwise be fairly clean.  I was surprised to see how much ripple was making it out of the PWM, and how much effect this had on the quality of the audio from the voltage controlled oscillator (VCO). I was also surprised to see what little effect the dithering was having on the output.

I consulted the online RC Low-pass Filter Design Tool to get some values for an additional low pass filter, this time set to a conservative 1K (remember that 1 K is about the lowest we can safely go when dealing with control voltages).

The returned values were:

1uf for the capacitor

160 ohms for the resistor

Implementing the 1k circuit on a breadboard and adding it to the outputs of the Eruoduino, the ripple goes away.  In addition the audio from the VCO sounds cleaner – previously there were what sounded like faint difference tones in addition to the actual sine wave of the audio – perhaps an unintentional bit of FM synthesis.  These have disappeared completely.

Modding the circuit is cheating, I suppose, but it, along with the dithering of the output has produced a much more musical result.  I suppose that if you have need for DC control voltage response above 500k, this might not be for you.  And if you do, let me know – I’m really curious to know what it might be and add it into my considerations.